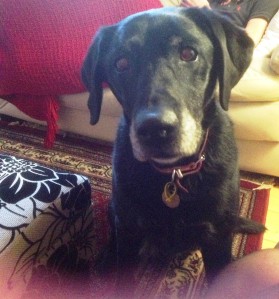 Now, if you have 2 dog biscuits, and you share 1 of them with the dog over the road, how many dog biscuits do you have left? “Woof!” We will take that as “2”, because you don’t share dog biscuits. The labrador’s code.

Last question. What are the chances of me walking out the back door and threading my way, in the dark, toward the shed without standing on a Daisy deposit? “WOOF!” Yes, I thought so. No chance at all. All of the statistical probabilities have been covered off there. It’s all about drop zones. Golf course design 101. Sitting at home during the day, Daisy has carefully surveyed the back garden, conducting time/motion studies, stepping out likely paths, calculating “what if” outcomes and then mapping drop zones. The clothesline is another killer location. The sheets hang low to the ground, providing an excellent trust screen. As you duck your head purposefully into the sheet to push your way through to the other side, you know instantly that you have made an error in judgement.

Our family dog “Daisy”, a 10-year-old black (and grey muzzled) Labrador, is comfortable with numbers.

How many black socks can she swallow and pass through her internal workings? 23. This experiment was conducted when Daisy was in the first years of her seemingly endless adolescence. We raced her off to the vet the first time she inhaled a sock, and had her stomach pumped. We weren’t aware of the next few intakes until we spotted elongated deposits on the lawn. I thought very briefly about putting the socks back through the wash and re-using them, but that idea was never going to trouble the patents office. After sock number 3 evaporated and then found itself re birthed and stretched out on the lawn, we added oil to her food and kept all socks off the floor and out of reach. There were clearly serious policy breaches because we counted 23 elongations in total, before she decided that it probably wasn’t a fruitful pursuit, and refocused her attention on drop zone management.

Our two children were both in primary school when mum suddenly appeared at the door of their classrooms cradling a tiny 8 week old, sleepy-eyed pup. I built Daisy a kennel, made from leftover renovation materials so it matched our house. When it was finished, we placed her bedding in the kennel and she went straight in there and made it her sleeping quarters. Soon after, whilst getting all her shots done, we were exposed to the concept of pet insurance. We decided that insurance might be a good idea. That was an understatement.

Daisy is a veterinary frequent flier. She could fly around the world (up the pointy end) and stay in 5 star resorts with her points. She was once awarded the title of “Pet of the Week” at the local vet clinic. If Awards are based on clinic income,  Daisy is a frontrunner for “Pet of the decade”. Labradors eat anything that is not nailed down, and they sometimes even eat things that are. I lost 3 heavy-duty BBQ covers in very short space of time. The plants in our back garden were very nervous in Daisy’s early years. Some of them wound up being reduced to single sticks poking out of the ground. After numerous operations, and 2 weeks in vet hospitals and clinics, the vets eventually found a 10 cm (4 inch) corn cob blocking her small intestine. They also found a bunch of muesli bar wrappers. On another occasion a bone was stuck in her intestine, they unzipped her again for that one. A few years ago she was hit by a car and presented with a fractured and totally stripped foreleg. Throw in a chronic yeast ear infection, several bouts of gastro, and a few other complaints, and it is time to start thinking about a second mortgage. The bills were horrendous, but thankfully covered by insurance. We nearly lost her a few times, but thankfully she has pulled through each time.

Despite Daisy’s extended adolescence, she has, over time, gradually mellowed into a refined, middle-aged citizen. She sits on the third step of the stairs at home so she can survey all ground floor activity before her, but she is also perfectly placed to hear what the kids are doing upstairs. She sat on that step as a pup and had room to spare; now she has to constrict herself to fit, with paws hanging over the front of the step. Good luck trying to get past her. Often there will be activity in four different rooms in our house, so Daisy does periodical room checks just make sure everyone is okay, poking her head into each doorway, assessing, giving the all clear, and then moving on.

Daisy is a constant. Always pleased to see you, always smiling and wagging her tail, always in a good mood, always hungry, and always ready for a walk to the park. She sits at the front door, willing us to lift the lead off the hook in the hallway. Every time I stand up, she stands up as well, with a quizzical sideways expression, trying to read my face. “A walk?” If I go and change my shoes for any reason, Daisy is there asking the question. “Are we going to the park?”

We have always kept Daisy lean, not over feeding her or giving her scraps. I can’t vouch for the kids, as Daisy seems to immediately hover around them when they near the kitchen. They strenuously deny any dietary indiscretion, but the Pavlov-like behaviour is unmistakable. Daisy’s hearing is not what it used to be, but she can detect even the smallest of crumbs as they find the kitchen floor, swooping in and Hoovering under your feet.

On her birthday and Xmas morning, we give her wrapped presents. She knows exactly what this is all about, trapping the present on the ground between her paws and tearing the paper off, to reveal a new ball or toy. It is extraordinary to watch.

We know that our time with Daisy is only limited. It is almost impossible to imagine living in our house without her. She has been a flawless family member, a great companion and friend to all of us and to our extended family and friends, and the neighborhood. She has watched our children grow up and become adults, and they, in turn, have seen her grow from a tiny ball of fluff into a mature, grand lady. We will cherish every moment that we have with her until eventually that time comes. In the meantime, she has earned some very special treatment.

As I write this, Daisy is coughing and gagging in the hallway. She appears to have swallowed something a week ago and has been to the vet twice since. More flier points. Maybe a quick holiday in Fiji. We may need to take her back again today for another assessment and more medication. I know she gave up socks a long time ago, but maybe she found a really good one?

Anything you want to say Daisy? “Woof, cough, gag, woof!” [I’m fine…now how about that walk?]

4 Responses to The sock mathematician.