Take a good long hard look at yourself.

“You need to take a good, long, hard look at yourself”, I advised my father, “and decide if you really should hang on to all this junk”.

We stood and surveyed the contents of Mum and Dad’s garage floor at the rear of their property in picturesque Mansfield, 2.5 hours out of Melbourne in Victoria’s high country region. My parents are on the move again, embarking on their next life adventure. They both retired and moved out of the city 12 years ago to retrace their early years living in country Victorian towns, and to be near some of their children and grandchildren whom had settled in the area. Now their offspring have nearly all moved out of the district, and as the distance to Melbourne has become increasingly difficult to manage, they have decided to spent the next chapter of their lives by the sea, and closer to Melbourne. They made the decision one day over coffee, sold their house a few days later, and purchased another house on the Mornington peninsula a few days after that. They don’t muck about, my parents, but I guess there is no time like today, and whilst they are still in reasonable shape, they want to squeeze what they can out of their tomorrows.

According to Dad, the garage had already been cleared of all unwanted items. Some items had already moved out and found happiness living with my siblings in sparkling new sheds with newer tools and appliances to play with; whilst other less fortunate items were sadly discarded and left exposed to the elements at the local tip. Some may have even met their fate in the jaws of the dreaded rubbish “Crusher”.  All the shadow boards on the walls had been cleared, and what was remaining was sorted and arrayed in piles in the centre of the garage floor. There was still a heap of stuff there, that, to me, looked like old junk.

“What have we got here, Dad? Surely you’re not going to keep all this stuff. You’re 83, and the likelihood of you never using any of it again is 83%. What are you going to do with it all?”

Dad knew exactly what he was going to do with it. “I’m going to put it into temporary storage until I can get a decent sized shed built at the new place, and then I’ll transfer it all in. No problems, then it will all be sorted and in its place.”

I just couldn’t see the sense in it. “So you are going to move a whole lot of old stuff into a storage facility, waiting for a new shed to be built, and then move it all again, and then never use any of it?”

Dad laughed and confessed that every time he ever tried to find the weed sprayer, the garage was too cluttered and it was always somewhere in there “hiding from him”, so he would have to go out and buy another bottle, and he said he had no idea just how many of them he had accumulated until the clean up. “Most of those bottles still have something in them”, he contended, “So I’m not throwing them out. And whilst hand weeding is not really an option any more, I can still nuke those weeds with the bottled stuff.”

“And what about all those old crusty paint tins?” I continued, “Walls haven’t seen those colors since the 70’s!”

“That’s not true. Those colors are just coming back into fashion. I’m not sure what the condition of the paint is like, so I’ll need to open them up and take a look inside at some stage, but I might still find a use for it all, you never know.” Dad smiled broadly and then cheerfully recounted a story about how he had painted one of the houses we grew up in as kids. He had started with the kitchen. Then he gradually worked through each other room in the house as time permitted, and when he was just adding the final coat to the entrance hallway, a visiting friend candidly noted that it all looked great, and that all Dad had to do now was to finish by painting the kitchen. Dad said painting that house was like painting the Sydney Harbor Bridge – once you finish at one end, you had to start all over again at the other!

But I wasn’t letting up. “So what about all these old rusted tools leaning up against the wall, you’re not going to keep all those, are you?”

“As you know,” he insisted calmly, “I distributed a list of all the items to everyone in the family, and these are the leftover tools that no-one really wants. They are still perfectly good tools, I’ve had them forever, and it seems a shame to get rid of them … even if, as you keep telling me, I don’t ever use them again.”

I remembered many of those tools from when I was a child. I remembered all those gardening afternoons we all had as a young family, digging out our vegetable garden, and planting Rhubarb that we could already taste in mum’s famous rhubarb pies. My siblings and I also used a lot of the tools to build cubby houses in the fruit trees in our back yard – Dad always said that if he was looking for the hammer it was quicker to search for it under the apple tree where we had invariably left it.

I left Dad standing in the garage, staring at all the stuff that he would probably never ever use again, and went to help mum clear and clean out some kitchen cupboards. Soon afterwards, I spotted Dad sitting in their sunny indoor courtyard, and as I studied his face from a distance, he looked to be uncomfortable in his thoughts. As I sprayed and wiped the insides of cupboards and periodically backed away from inhaling the cleansing agent’s toxic fumes, I monitored’s Dad’s expression as he stared up through the glass ceiling of their sun-room, just pondering what we had discussed.

I knew that look on his face, I had seen it many times before. As a retired lawyer, he was carefully weighing up the evidence. My words were challenging his previous judgement, so had re-opened the case. I had submitted my closing argument, and he was now considering all the facts in front of him, but there was also an uncomfortable sadness about him.

In between holding my breath and diving into cupboard cavities, I too began to think about what we had discussed in the garage. I’m not one to hang on to things. I work on the “12 month rule” – if it doesn’t get used in 12 months, it should get tossed out, and this applies to everything in my shed except my surfboards (with every rule there has to be at least one exception, right?) I throw things out and then some of them manage to find their back into the shed again after my wife and/or kids rescue them from the bins or hard rubbish collection.

And that was when the penny dropped. Why do I believe so firmly in the 12 month rule but have an exception for my surfboards? When I am older and have a zero probability of ever using them again, will I throw them out? I know that I won’t. And why not?

Because they hold my memories.

Dad’s hands may have lost a lot of their strength and dexterity, and he is now limited in how much he can do around the house, but he still remembers vividly all the things he once did, and those bits and pieces that I called junk has his DNA embedded in it. There is nothing wrong with wanting to look at them, or smell them, or take a look inside the tins to see what condition they are in, and conjur up all those memories of things that he made or rooms he has painted, or cubby houses that we kids invariably hid the hammer under. Nothing wrong with that at all.

I know that you will read this Dad, but rather than say it at the time, I thought it might be nicer to tell the story and finish it by saying this…

“You need to take a good, long, hard look at yourself … and decide what your new shed is going to look like, and make sure it is big enough to neatly house all of those memories”. I’ll help you move them in, and I’m sorry for misreading that moment in the garage.

Footnote: I walked into my own shed to take some suitable photos for this story and the first thing I saw was 7 bottles of weed spray on a shelf. And I  don’t have an excuse for having so many of them – they weren’t hiding from me. 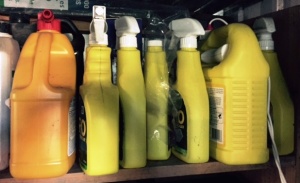 15 Responses to Take a good long hard look at yourself.